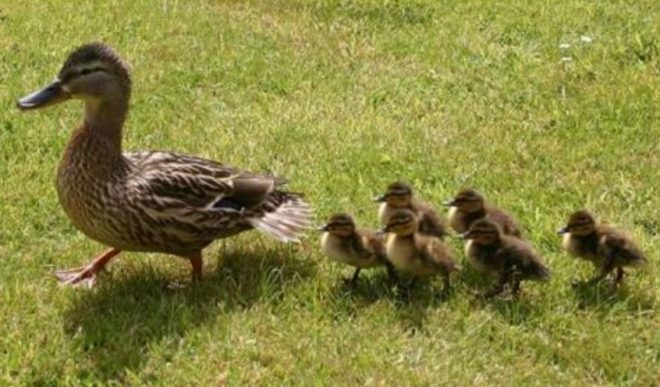 Imprinting has gradually become one of the fascinating practices amongst animals and pets alike. Different species of animals imprint on different things, this is something of stale news as at this point but then; this article focuses on imprinting, specifically imprinting in Ducks. With that being said, let’s begin.
Birds in general have this one unique ability that makes geese, the first, and ducks, the second, most natural animal companions to humans. This ability, which establishes itself as one of the strongest forces of nature, is the “Imprint”.

It was described beautifully by Konrad Lorenz and his flock of graylag geese in the 1930’s, as the process by which attachment develops between a new-born baby and its mother. Newly attached baby ducks, which walk as soon as they are hatched, follow their mothers almost instantly.

Ducklings follow the first large moving object they see after hatching, particularly if it makes duck sounds. This is normally the mother in most cases, but if ducklings hatch without their mothers or just happened to be found immediately after hatching by someone, they will form an attachment to the person or anything else that’s the first moving object that they sight.

As they gradually put more effort into following this moving object (normally a mother duck), they gradually become strongly attached. It affects the characteristics of the duck(s) because it’s clearly a highly motivated behavior. Adults long after they detach from their mother often show the effects of imprinting.

Basically, a duckling knows that it is of the same specie as any larger object it sees upon hatching or immediately thereafter. A duckling doesn’t “think it is”, it doesn’t use the object or creature as a replacement until it finds its own species, it doesn’t “pretend”, rather in its mind it IS that “creature”.
Imprinting is so strong in ducks; so if you want a duck to live with its own kind, you should avoid having its imprint on a human. Having a duck imprint on a human makes sure it lives and loves humans. Fun thing is, ducklings imprint on the creature right away, but do not recognize individual faces for about a week even though it may recognize a voice.
There are two types of imprinting: Filial and Sexual imprinting.

Filial imprinting occurs during what is termed a “critical or sensitive” period just after hatching; this is usually between the first 24-48 hours of life. At this time, the duckling will learn to follow its mother (the first large object it sees). This ‘critical period’ can also act as a period od ‘development’ before the onset of fear of novelty, which typically starts to develop at about the third day in ducklings.

This spurs over a longer period of time and is responsible for the decisions a duck makes in regard to choosing a mate in the future. Sexual imprinting is simply the formation of sexual preferences that are revealed later in life. It is often expressed only at sexual maturity and is shaped by experiences before that time.

Waterfowl (duck) often choose their mate based on what their parents looked like. However, differences in sex of the ducks and sexual dimorphism in parents can cause variations. Therefore, while a male Mallard duckling will identify his mate by referencing it to his ‘parent’ appearance, the females do not.
Reports suggest that female Mallard shows a form of favor for whom they’ve been reared with irrespective of the specie. A hand breed drake is prone to show sexual behavior towards both humans and female ducks alike.

FACTORS TO CONSIDER BEFORE IMPRINTING ON YOUR DUCKLINGS

Imprinted ducklings need steady care. It’s one thing to want to imprint on your ducklings and it’s another thing to whether or not it’s the right choice. Before considering imprinting, several questions should be thought through:

1. Do I have the resources?

There’s a substantial cost as regards imprinting. This is as a result of the fact that the duckling who considers a human as it’s mother will grow to an adult duck with needs. These needs often include veterinary care, companionship (ducks cannot be kept alone as they are social animals), diaper harness, and diapers ( a lot difficult to get in some cases though), and also a predator-proof home.

Protection in terms of predators and mild diseases. Checking if there are dogs or other pets who may pose a potential danger to your duckling.

You should know by now already that ducklings poop a lot; they just can’t control it. If you’re the type that really doesn’t like poop around you, you should consider it because you’d have a duckling(s) literally following you everywhere after imprinting.

This and resources go hand in hand. Do you intend to keep your duck safe throughout its life – until the end? Ducks deserve forever homes, as do all living things. Provided you just can’t keep and care for your pets, there are some waterfowl rescues and duck lover group that would be willing to help and also aid in emergency cases.

If you have landlords, parents, guardians, or even law on ducks in your state, then it’s best to have every detail planned out before purchasing a pet duck.
Once all these check out – hopefully – you can successfully imprint your ducklings. Be sure to provide adequate care and nutrition to your ducklings and they also need attention and interaction with we humans (now seen as their duck caregivers or mothers. Good luck! 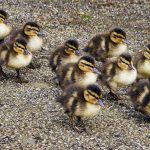